Over half a million people march for a 2nd referendum 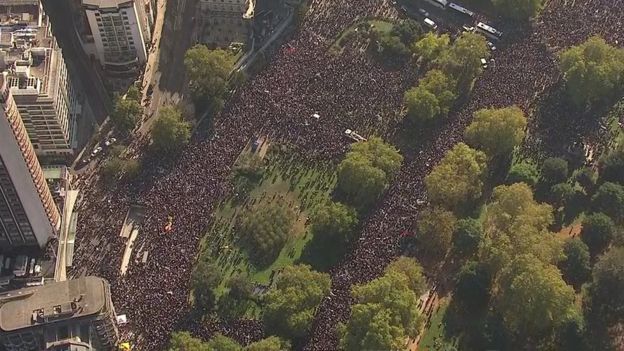 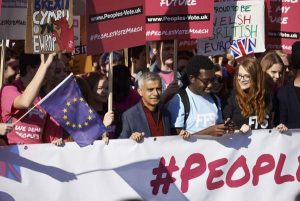 Protesters seeking a referendum on the final Brexit deal have attended a rally which organisers say was the “biggest” demonstration of its kind.

Tweeting:  “670,000 are on the #PeoplesVoteMarch demanding a #PeoplesVote on the Brexit deal.”

MPs from the main parties backed the event calling for a fresh referendum.

Prime Minister Theresa May has previously firmly ruled out having a 2nd referendum.

The People’s Vote campaign said stewards on the route estimated 670,000 were taking part. Scotland Yard said it was not able to estimate the size of the crowd.

The marchers set of from Park Lane making their way up to Parliament Square.

A number of politicians and famous face took turn speaking at the event such as Mayor of London Sadiq Khan, and even video messages from Richard Branson and Nicola Sturgeon, the First Minister of Scotland.

Sturgeon said in her message: “Let me say this loudly and clearly, if the issue comes before the House of Commons, SNP MPs will support a People’s Vote which includes the option to remain in the EU.”

Speaking before this appearance Khan said: “Today will go down as an historic moment in our democracy. A moment when in their thousands, people from every corner of our country and every section of our society will take to the streets – coming to make our voice heard.

“We’ve heard some complain that a public vote would be undemocratic and unpatriotic. But the opposite is true. There’s nothing more democratic – nothing more British – than trusting the people to have the final say on our future.

“The lies, the mistruths and the deceptions of the referendum campaign have now been exposed, and it’s clear the will of the people is changing. No one voted to leave the EU to make themselves poorer. No one voted to make life harder for our children and grandchildren. No one voted to see our NHS damaged. And no one voted for the shambles that this Government has created.”