Information given to Londra Gazete from Bedfordshire Police confirmed that 4 of the 6 males arrested have now been charged for Cemeren Yilmaz’s murder.

Aaron Miller, 19, of Tavistock Street, Bedford, and three 15-year-old boys from Bedford, who cannot be named for legal reasons, have been charged with murder in connection to the incident.

All four are due to appear at Luton Magistrates’ Court this morning (Thursday 20 September).

A 40-year-old man from Bedford has been released by police and will face no further action.

A 19-year-old man from Bedford will face no further action in terms of the murder enquiry, but remains under investigation for drug offences.

On Sunday 16th September 15 year old Cemeren Yilmaz also known as Cem was attacked by a group of males, he suffering stab wounds and other injuries. The attack took place around 22.20 BST on Ashmead Road, Bedford.

He was taken to hospital for treatment but sadly was pronounced dead on Monday 17 September morning.

In a statement made by his family they said:  “Cem was a much-loved son, grandson and brother. It is a very sad loss for us as a family and we are heartbroken at his death.”

“He was a lovely and popular boy and had his whole life ahead of him.”

Bedfordshire Police had made an appeal for information on Cemeren Yilmaz’s death, calling on friends or anyone who has any information to come forward. 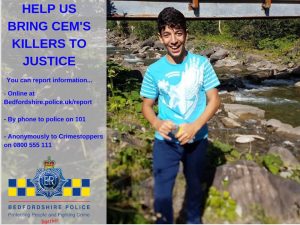 Detective Chief Inspector Michael Branston, from the Bedfordshire, Cambridgeshire and Hertfordshire Major Crime Unit, investigating, said: “Our hearts go out to Cem’s family at this incredibly difficult time. We are absolutely determined to bring those responsible for this shocking attack to justice.

“While we are piecing together the information about what happened, we are really keen to hear from Cem’s friends about the background to this appalling incident.

“We would like to speak to anyone who can help us understand why Cem was targeted, or anyone who has any other information that could help us with our enquiries.

“You can get in touch with us online, or you can leave information anonymously if you so wish, but I would urge anyone who can help us to do so, so we can get justice for Cem and his family.”