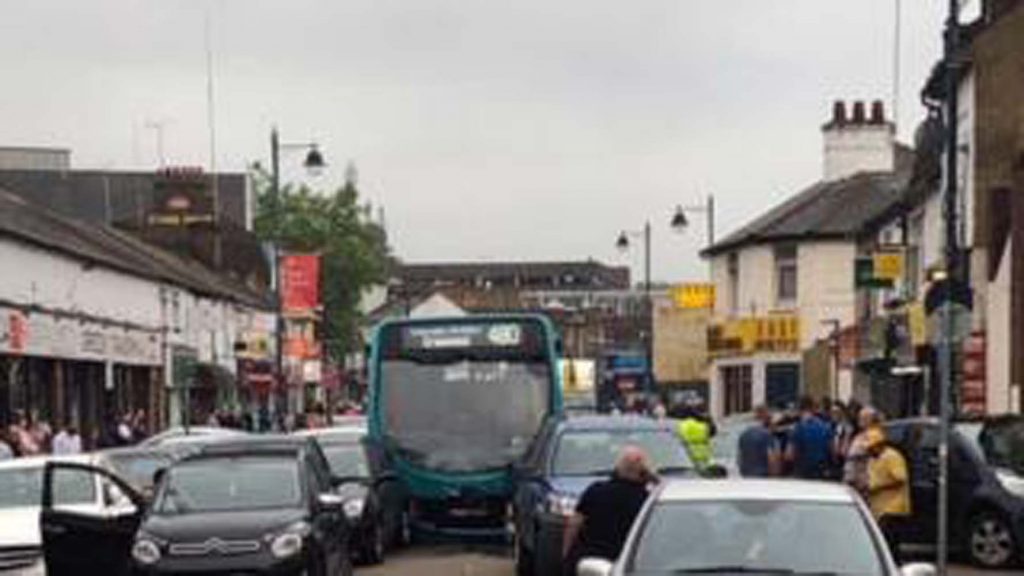 A bus has ploughed into dozens of cars stuck in traffic in a busy town centre, leaving a trail of devastation.

Seventeen people suffered injuries, believed to be minor, in the crash which saw 25 vehicles damaged in Hythe Street, Dartford just before 19:00 BST.

A man has been arrested on suspicion of careless driving and is in police custody.

Arriva Kent and Surrey confirmed one of its buses was involved and said it was “supporting the emergency services”.

Police, fire and ambulance services were called to the aftermath and treated a number of “walking wounded” at the scene.

One person required oxygen after the incident and South East Coast Ambulance said one man was taken to hospital but is not believed to have suffered serious injuries.

Tony Brown, 38, from Dartford, was going for a meal and arrived on the scene just after the crash.

He said: “Judging from people on the scene, the bus simply ploughed through a number of cars that were stuck in traffic waiting at the traffic lights in Hythe Street.

“Whether it was brake failure or the throttle jammed, he made it a good way through at least five rows of cars before coming to a stop.

“There were no visibly seriously injured people, but lots of people in shock and damaged cars.”

Police said the road remains closed but should be open again overnight.

The bus, operated by Arriva Kent and Surrey, had recently been named after veteran passenger Ivy Woolcock.

The company’s area managing director, Oliver Monahan, said: “Arriva can confirm that a bus has collided with a number of vehicles on Hythe Street in Dartford on Tuesday evening.

“There have been some reported injuries and at the moment our priority is supporting the emergency services. Our thoughts are very much with all those affected.” (BBCNEWS)