Organised by the Council of Turkish Cypriot Associations UK (CTCA), the very first Northern Cyprus Festival is expexted to hit the grounds with a series of success. 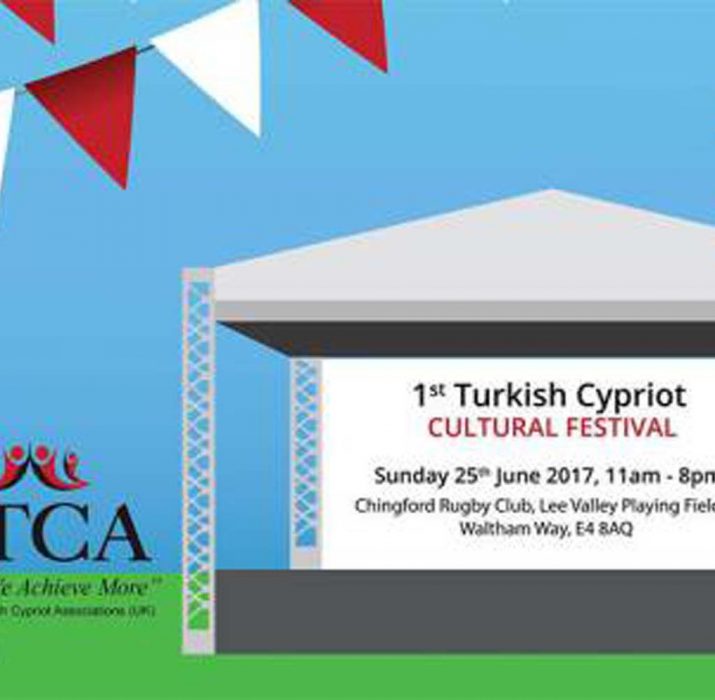 Organised by the Council of Turkish Cypriot Associations UK (CTCA), the very first Northern Cyprus Festival is expexted to hit the grounds with a series of success.

Celebrating Turkish Cypriots’ 100th anniversary of emigrating to the UK, the festival see an intertwinement of arts, culture, sports and solidarity. The Turkish Cypriot emigration that started on 27 November 1917, had many Turkish Cypriots scattered around the globe from UK to Turkey and Australia. Cypriot Turkish Communities Association (CTCA) is now celebrating the diversity and contribution of Turkish Cypriots to the World by organising the very first Northern Cyprus Festival.

Many Turkish Cypriots, who fled the country and therefore grew an enduring longing to Cyprus will end at this festival. As many compromises and devotions have been made to make the festival happen, the festival will comprise the delicacies from the one and only Turkish Cypriot cuisine along with Osman Balıkçıoğlu Cabaret performances and musical festivities by Arif Edizer, Bora Serbülent, Zülal, Osman-Kelebekler, SOS Grubu, Kıbrıs Dörtlüsü and Dj Ahmet.

Towards the big day, the promotion endeavours are enduring as many advertisements inside some tube stations, delicately picked from the spots which have the highest rate of Turkish speaking communities live, can be seen. Some of the stations are Finsbury Park, Chingford, Southgate, Cockfosters, Wood Green, Tottenham Hale, Leytonstone and Walthamstow under and overground stations.

MARK YOUR CALENDARS FOR 25 JUNE

Many Turkish Cypriots from all over the UK will be meeting at the festival on 25 June, between 11.00 – 20.00 at the Lea Valley Playing Fields Chingford, E4 8AQ.