THE teens who allegedly mowed down revellers in a horror hit-and-run in London were fleeing the scene of a robbery, it is claimed. 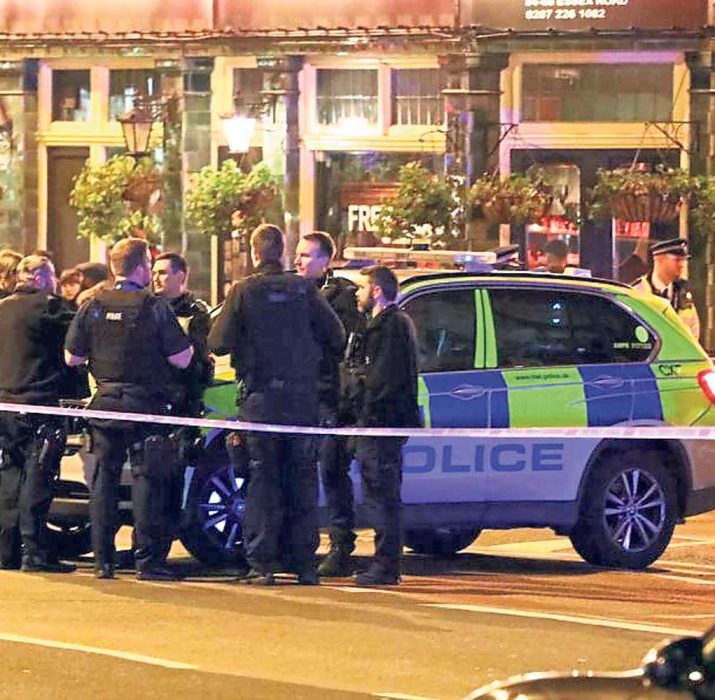 THE teens who allegedly mowed down revellers in a horror hit-and-run in London were fleeing the scene of a robbery, it is claimed.

Three people were left injured after a car ploughed into people outside a pub in Islington, North London, at 50mph after mounting pavement.

The Metropolitan Police have revealed that cops were called to the scene of a mugging in nearby Cross Street, five minutes before the violent smash.

After the teens fled the scene of the horror crash on foot, they were pursued by officers who made four arrests. They were not being chased by police when the accident happened.

A fifth suspect, who is thought to have been in the car, was later arrested by police and is still in custody.

Dozens of cops and paramedics were called after the disturbing crash, in which people were “mowed down like dominoes”, by a Peugeot Partner just before 11pm.

Witnesses claimed a motorist in a people carrier mounted the pavement and hit a number of pedestrians queuing outside the Old Queen’s Head pub on Essex Road.

With tensions extremely high after the London terror attacks in which Khalid Masood mowed down pedestrians on Westminster Bridge, a spokesperson for the Metropolitan Police said that the incident was not being treated as terrorism.

Superintendent Peter Gardner, from the Central North Area BCU, said: “This is a complicated incident involving a number of suspects.

“We are continuing to question those we have detained and are appealing for information and witnesses to piece together the events of the evening.”

An ambulance spokesman said: “We sent a number of resources to the scene including three ambulance crews, an incident response officer and a paramedic in a car.

“We treated three patients at the scene and took them as priority to hospital.”